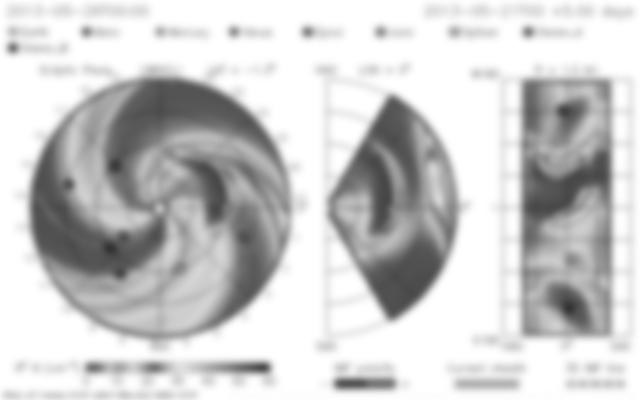 NOTE: Some browsers will display the animation only when it is fully loaded. This may result in delays of more than 10s.


ENLIL is a time-dependent 3D MHD model of the heliosphere. It solves equations for plasma mass, momentum and energy density, and magnetic field, using a Flux-Corrected-Transport (FCT) algorithm. Its inner radial boundary is located beyond the sonic point, typically at 21.5 or 30 solar radii. It can accept boundary condition information from either the WSA or MAS models. The outer radial boundary can be adjusted to include planets or spacecraft of interest (eg 2 AU to include both Earth and Mars, 5 AU to include Ulysses, 10 AU to include Cassini). It covers 60 degrees north to 60 degrees south in latitude and 360 degrees in azimuth.

BATSRUS, the Block-Adaptive-Tree-Solarwind-Roe-Upwind-Scheme, was developed by the Computational Magnetohydrodynamics (MHD) Group at the University of Michigan, now Center for Space Environment Modeling (CSEM). It was designed using the Message Passing Interface (MPI) and the Fortran90 standard and executes on a massively parallel computer system. The BATS-R-US code solves 3D MHD equations in finite volume form using numerical methods related to Roe's Approximate Riemann Solver. BATSRUS uses an adaptive grid composed of rectangular blocks arranged in varying degrees of spatial refinement levels. The magnetospheric MHD part is attached to an ionospheric potential solver that provides electric potentials and conductances in the ionosphere from magnetospheric field-aligned currents.

GIC (Geomagnetically Induced Currents) can be induced in technologically networks located underneath these currents, such as railroads, power transmission lines, and pipelines. During electromagnetic storm periods caused by the Sun these GICs can be large, often exceeding several hundred Amperes, and cause catastrophic consequences to the system in which they flow. Scientists at Dartmouth are attempting to predict the occurence of GICs using physics-based models of the global magnetosphere, ionosphere, and Earth conductivity together with input from a satellite located in the upstream solar wind. The electric (and magentic) field at the surface of the Earth over North America will be determined with 30-90 minutes warning, allowing an advance warning of GICs to be calculated for specific conducting networks.


*Not updated at the moment